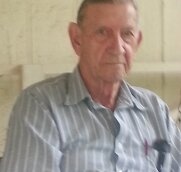 William Gene Caldwell was born April 19, 1933 in Wann, OK the son of Alva and Esther “Esie” (Weston) Caldwell. Bill graduated from Coffeyville High School and went to Long Beach Junior College. Bill proudly served this country in the US Air Force during the Korean War. He formerly worked as a Postal Clerk, in an aircraft facility and carpentry. He loved hunting, fishing, model planes and wood working. Bill moved to Grove, OK 1992 from Wichita, KS. He loved the Lord Jesus Christ.

Visitation with a time remembrance will be held from 1 to 2 pm, Monday, December 27, 2021 at the Campbell-Biddlecome Funeral Home, Seneca, MO. At the conclusion of visitation Military Rites will be performed at the funeral home. Following the visitation, a private burial will be in the Seneca Cemetery.
To order memorial trees or send flowers to the family in memory of William (Bill) Caldwell, please visit our flower store.