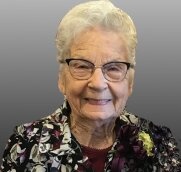 Wanda was born on a farm north of Aoache Oklahoma on April 21, 1930, the third Child of Lucille Katherine (Wagner) McCay and Oney Jachin McCay. She was baptized as a baby and confirmed In the Lutheran faith at St Peter Lutheran Church of Apache. Wanda loved the Lord
and studied the Bible her entire life. She loved Jesus and she loved people, befriending everyone from all walks of life.

She told stories that usually started with "there were seven of us kids at home ... " and "we were poor, but we never knew it" Wanda was a hard worker her entire life, beginning at home on the farm where she did chores of aII kinds: washing dishes, cooking, cleaning house, milking cows, chopping and picking cotton, just to name a few. She often reminisced about her happy childhood with her three brothers and three sisters, Larry, Deveryl, Carl, Gerald, Delores, and Carolyn Sue. She attended school at Stecker until the fifth grade when the family moved to Broxton. Wanda was a good student and loved school. She was also excellent at sports, especially softball and basketball. In 1948 she graduated from Broxton High School near the top of her class, but there was no money for college, so she went to work in Oklahoma City as a waitress.

One weekend in September 1948, she came home to visit family in Apache. She went on a date with her boyfriend Harley and they ended up in Henrietta, Texas getting married that night by a Justice of the Peace. Their witnesses were Wanda's sister Deveryl, and Harley's little brother Jim. So began the many adventures shared by Wanda and Harley, and on September 19 this year, they would have celebrated their 72nd anniversary.

Her life's work was to be a wonderful wife and loving mother to her children. There were four Children born In Oklahoma: Joe Bob, Gary Dean, Tim Lane, and Susan Delores. She also helped on the Phariss farm during cotton season and wheat harvest or wherever she was needed. After the family moved to California, Wanda and Harley's family was completed by the birth of Mary Ludine. She was the best mom and everyone loved to visit because she was so welcoming to aII the kids' friends.

From California, Harley, Wanda, and the girls moved to Alaska. What an adventure! Wanda continued to live by her motto of "Bloom where you are planted" and she became a member of the community by being active in her church, Star of the North Lutheran In Kenai and Peninsula Petroleum Wives Club. She made many more lifelong friends whom she and Harley loved to visit in later years aII over the United States.

After a brief return California and back to Alaska one more time, they moved to Stark City, Missouri to live on a small farm. By this time, Mary was the only child at home. Once again, Wanda joined the local church, First Lutheran, In Neosho. In 1976, her prayers were answered when both Harley and her first grandson John were baptized by Pastor James Schnackenberg.She continued to be a faithful member of Lutheran Women's Missionary League (LWML) as she had been previously at several congregations in Oklahoma, California, and Alaska. Lutheran Women in Mission, as it is now known, was especially dear to her heart as her grandmother Carrie Wagner was a charter member of the Oklahoma District of the organization when it was in formed in 1928. In April 2018, Wanda was honored as a current LWML member and as one of Carrie's descendants at the Oklahoma District Convention.

The next adventure was when Wanda and Harley moved to Grove, Oklahoma, on the shores of
Grand Lake. She enjoyed fishing and gardening, and it was while living there they joined St. Paul's Lutheran in Fairland, where they made even more life long friends! Wanda worked part­
time at Grove Walmart for five years. She also began volunteering at the hospital in Grove with her bestie lmogene with the Cherry Red auxiliary, which she continued faithfully for 21 years,
retiring at the age of 87. After residing in Grove for about 10 years, Wanda and Harley moved to their home south of Fairland, where she lived until she went to assisted living in March of this year. She became a member of Immanuel Lutheran Church in Joplin, where she especially loved to sing, visit friends, and pet the comfort dogs, Jackson and Louie. No matter where she went, Wanda lived life to the fullest. She faithfully read her Bible and Portals of Prayers daily, and she cared for people in many ways. She lovingly raised her kids, bragged on her grandkids and great-grands, cooked and baked the most mouthwatering food, laughed a lot, and told fun stories. She skillfully played cards, especially pitch, pinochle, and cribbage, and she loved traveling to visit family and friends, including many trips to Germany Md Alaska. Wanda could easily organize big and small family reunions for both sides of the family, and she could knit the best slippers! She was always up for an adventure and ready to go.

Wand had the gift of making each person feel special and that she loved them no matter what. She always had a kind word to say, and looked for the good in each person she met. Even though she suffered many health issues, including heart attacks, rheumatoid arthritis, colon cancer and finally, dementia, she did not complain or ever ask "Why me?" She was very brave and strong to the very end.

A celebration of life will be held on Saturday, October 3, at 2:00 p.m. at Immanuel Lutheran
Church, 2616 Connecticut Avenue, Joplin, Missouri.
Wanda's cremains will be Interred In Fairview Cemetery, Apache, Oklahoma at a private family gathering.

In lieu of flowers, memorial contributions can be made to LWML - Lutheran Women In Mission in care of the Campbell-Biddlecome Funeral Home, PO Box 380 Seneca, MO 64865.

Many thanks from the family to the caring staff at Spring Hill, the Arbors, Oak Pointe, Freeman Hospital, and Compassus Hospice.
To order memorial trees or send flowers to the family in memory of Wanda L. Phariss, please visit our flower store.