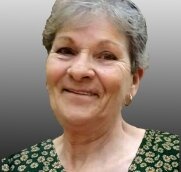 Vickie Lynn Sanders, 72 of Neosho, passed away on Friday evening January 17, 2020 surrounded by her loving family. Vickie was born on February 14, 1947 to King Solomon Asbell and Bonnie Gene Asbell (Mahurin). She first married John Morgan, with 2 daughters born to this union. She later married Floyd E Sanders who preceded her in death in 2000.

Vickie worked at Honey Bear then Tyson Foods and retired in August of 2019 from Neosho School District as a cook at Carver Elementary.

Vickie was preceded in death by her parents and her husband Floyd Sanders.

A Reflection of Vickie's Life will be held at Campbell-Biddlecome Funeral Home in Seneca on Saturday January 25th at 2:00 p.m with a visitation following at 2:15 pm

A private inurnment of cremains will be held in the Oronogo Cemetery at a later date.
To order memorial trees or send flowers to the family in memory of Vickie Lynn Sanders, please visit our flower store.

Visitation will follow the reflection of Vickie's life memorial service.