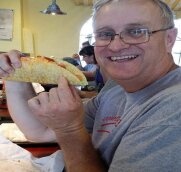 Timothy Mark Hayes, 60, returned to his heavenly home on June 15, 2019 after a short battle with cancer. His devotion to his family and his firm belief in God supported him in his struggle and ultimately gave him peace in passing from this life to the next.

Tim was born to the late Bill Hayes and his wife Polly in Hays, Kansas on September 14, 1958. He married his high school sweetheart, Jana Kay, on April Fool’s Day in 1978, but their love was no joke! During his lifetime he played in the Little League World Series, was a star basketball player, an avid fly fisherman and outdoorsman, a prankster, and a handyman among other things. His last job on earth was as the custodian at Seneca Intermediate School, where he provided a godly example and brought smiles and laughter to the lives of the students and teachers. He attended the Seneca Church of Christ where he has served as a deacon, elder, and teacher. The greatest achievement of his life was bringing up his four children in the Lord to become faithful, Christian adults. In his later years, he focused on spoiling grandbabies, snuggling his pups, Max, Rosie and Rambo, teasing his adult children and indulging in his wife’s desires to drive all over the country in search of good diners, hole-in-the-wall stores, beautiful waterfalls and the like.

He is survived by his wife Jana and their four children, Shannon and husband Greg Hatfield, Matt and wife Kayla Hayes, Mark and wife Hannah Hayes, and Ashley and husband Jeffery Kelley. He also leaves behind four grandbabies, Liam, Mia, Corbin and Jack, with one grandbaby on the way in November. He is survived by his mother Polly and siblings Bill and wife Madeline Hayes, Cathy Mahoney, Mike and wife Marie Hayes, and Patty and husband Doug Downum. He is also survived by Darry and Sherry Sandtorf, who always considered him a son, and brother-in-law David and his wife Carolyn Sandtorf. He leaves behind a slew of nieces and nephews who have fond memories of Uncle Tim and his antics and love.

He was preceded in death by his father William “Bill” Hayes and brother-in-law Jim Mahoney.

To order memorial trees or send flowers to the family in memory of Timothy M. Hayes, please visit our flower store.