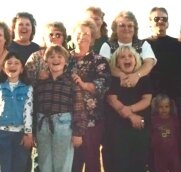 Terry I. Mersman was born November 24, 1959 in Neosho, MO the daughter of Edward and Clornia (Bennett) Mersman. Terry enjoyed spending time with her grandchildren, crafting, scrapbooking and shopping for her kids and grandkids. Terry was a homemaker and was of the Christian Faith.

Terry I. Mersman married Darrell Testerman December 24, 1977 in Seneca, MO and he survives.

The family will receive friends from 6 to 7 pm, Thursday, November 19, 2020 at the Campbell-Biddlecome Funeral Home Seneca.

Graveside services under the direction of Campbell-Biddlecome Funeral Home Seneca, MO will be held at 10:00 am, Friday, November 20, 2020 at the Thompson Grove Cemetery, south of Seneca, MO with Pastor Billie Gibson officiating.
To order memorial trees or send flowers to the family in memory of Terry Testerman, please visit our flower store.