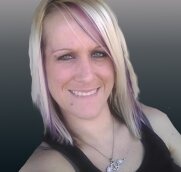 Tara Lee Greninger was born July 20, 1984 in Joplin, MO the daughter of Jeff and Stacie (Mullin) Grininger. Tara had lived in the area all her life. She enjoyed dirt bikes and ATV’s, softball, volleyball and pyrotechnics. Tara formerly worked for Schloberknockers and the Seneca House Nursing Home.

The family will receive friends from 6 to 7pm, Monday, May 23, 2022 at the Campbell-Biddlecome Funeral Home, Seneca.

Funeral services will be held at 10:00am, Tuesday, May 24, 2022 at the Campbell-Biddleocme Funeral Home. Burial will be in the Hornet Cemetery with James William Greninger, Jeremy Mullin, Dustin Sheed, Thomas Hall, Jason Burleson and Jim Greninger serving as pallbearers.


To order memorial trees or send flowers to the family in memory of Tara Greninger-Hogan, please visit our flower store.