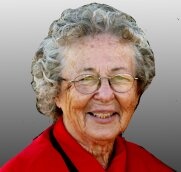 Ruth A. Yeakey, 93, Seneca, MO passed into eternal rest January 14, 2021 at her daughters’ home in rural Seneca after a long illness.

Ruth Aileen Golden was born November 8, 1927 in Seneca, MO the daughter of Raymond and Lora (Adams) Golden. Ruth was a lifelong area resident. She and her husband owned and operated the Seneca Locker Plant. She enjoyed the outdoors, loved her cows, quilting and farming. Ruth was a faithful member of the Swars Prairie Church of Christ.

Graveside services under the direction of Campbell-Biddlecome Funeral Home, Seneca will be held at 2:00 pm, Friday, January 15, 2021 at the Swars Prairie Church Of Christ, south of Seneca with Gayle West officiating.