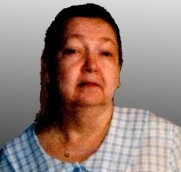 Rosemary Ann Cox, age 82, passed from this life on July 29, 2019 after several years of poor health.

Rosemary was born on September 7, 1936 to Lennie and Leora Lankford Cox. She was the youngest of six children and resided with her parents until their passing. She lived her entire life in Seneca and the surrounding area. Her young years were spent on the family farm south of Seneca. As her parents aged and were unable to manage the farm they then moved into Seneca where she lived until 2013 until she was admitted to the Seneca House. She resided there until her death.

Rosemary never married but was surrounded by many family members, including nieces and nephews who fondly remember the many summers spent visiting the family farm. Summer was not complete until we each had our “3 days and 3 nites “ spent with our grandparents ad Aunt Mary. Rosemary was a lifelong faithful Christian and was a member of the Church of Christ.

She was preceded in death by her parents, brothers, Kenneth, Lloyd, Ray and Johnnie.

A special thanks to those who visited her in the nursing home over the last 6 years. Also to the church ladies who came frequently and sang for the residents and to the employees at the Seneca House who cared for her and provided for her needs.

Graveside services will be held Friday, August 2, 2019 at 2:00 pm at the Swars Prairie Church of Christ Cemetery with Ron Lankford and James Lankford officiating.

Arrangements under the direction of Campbell-Biddlecome Funeral Home, Seneca
To order memorial trees or send flowers to the family in memory of Rosemary Cox, please visit our flower store.