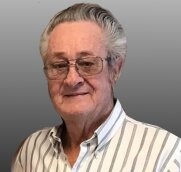 Ronald Hartford Griffin was born April 1, 1943 in Bakersfield, CA the son of Walter Andrew and Opal Vera Osborn Griffin. Ronnie had lived in the Seneca Area most of his life. He was a 1961 graduate of Seneca High School. He worked at McLove from High School until he went into the service in 1964. He served the country in the US Air Force during the Viet Nam War. Ron worked for LP Gas from 1968-1972. He then went to work for the former Milnot Plant in Seneca where he worked as a Maintenance Supervisor until retiring in 1996. Ron loved fixing up his 1951 Chevy pick-up truck which he has owned 51 years. Ron enjoyed collecting antique gasoline pumps, antique signs and going to steam operated equipment shows and swap meets. His life revolved around his grandkids and great grandkids. One of his favorite things to do with them was just to sit and watch them run around. Ronnie was a member of the Seneca First Baptist Church.

Ron was preceded in death by his father, Walter Griffin, his mother Opal Griffin, his stepmother Ethal Griffin and one sister Joan Humes.

The family will receive friends from 6 to 7 pm, Thursday, October 15, 2020 at the Campbell-Biddlecome Funeral Home, Seneca, MO.

To order memorial trees or send flowers to the family in memory of Ronald (Ron) Griffin, please visit our flower store.