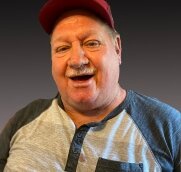 Robert L Hill was born November 16, 1946 in Neosho, Missouri. He was one of three sons to Gene “Cott” and Genelle (Pace) Hill. He entered into rest on August 20, 2021 after a short illness at the age of 74. Rob was a lifelong resident of southwest Missouri, being born and raised in Neosho and residing in Seneca for the last 39 years. Rob and Linda (Tucker) Hill were married on May 29, 1982. She survives. He is also survived by one brother, Roy Dean (Eula) Hill of Neosho, brother in law and sister in law, Jimmy and Patty Roberts of Seneca, sister in law Bobbie Hill, four sons, Craig (Mishelle) Hill of Neosho; Kelly (Melissa) Hill of Neosho; Casey Hill of Neosho; Rick (Kim) Doke of Winnemucca, Nevada, one daughter, Tammy (Pat) Linder of Seneca, 17 grandkids and 16 great grandkids. He was proceeded in death by his parents and one brother, Ray Gene Hill. Rob enjoyed spending his time fishing, woodworking, and watching his grandkids play.

The family will receive friends from 6pm to 7pm, Monday, Aug. 23, 2021 at the Campbell-Biddlecome Funeral Home.

Funeral service will be held at 10am, Tuesday, Aug. 24, 2021 at the Campbell-Biddlecome Funeral Home, Seneca, with Vivian Fink officiating. Burial will be in the Seneca Cemetery with Nolan Moyer, Jared Hill, Dylan Hill, Seann Bounous, Jim Gilstrap and Randy Hill serving as pallbearers.

In lieu of flowers memorial contributions can be made to the American Heart Association.

To order memorial trees or send flowers to the family in memory of Robert Hill, please visit our flower store.