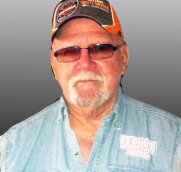 Raymond Gary Durbin was born April 14, 1941 in Seneca, MO the son of William H. Durbin and Elnora Elizabeth (McGehee) Durbin. Raymond was a graduate of Seneca High School. He served his country in the US Army. Raymond formerly worked as a heavy equipment operator and was a member of the Operating Engineers Local 101. Raymond loved classic cars, motorcycles and traveling to Oregon. He especially liked going to MaMa's Place where he sat at the liars table with Mike Gillian and the rest of his buddies.

Raymond G. Durbin married Mazie A. Montgomery and she preceded him in death March 7, 2011.

The body has been taken for cremation under the direction of Campbell-Biddlecome Funeral Home, Seneca, MO. The family will hold a Celebration of Life Service at a later date.
___________________________
To order memorial trees or send flowers to the family in memory of Raymond Durbin, please visit our flower store.