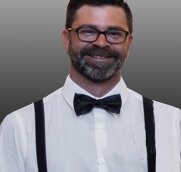 Paul was born on June 5,1978, in Long Beach, CA to Ronald Garrett and Janice Gannon. He grew up in Seneca, Missouri where he played baseball and graduated from Seneca High School and attended Pratt Community College on a baseball scholarship. Paul worked as Engineering Technician at Building and Earth Sciences in Bentonville, AR. Paul was a devoted father, son, and brother and was known for his charismatic and outgoing personality with a natural talent of story and joke telling. He loved making people laugh and often the life of any event!

He was preceded in death by an infant son Paxton Garrett, grandparents Wayne and Pat Byford.

Visitation and funeral service will be held on Saturday, Nov. 9 from 2 to 3 pm at Campbell-Biddlecome Funeral Home, Seneca. The family will be receiving family and friends immediately after service at 1406 Event Center, 1406 Cherokee St, Seneca.
To order memorial trees or send flowers to the family in memory of Paul E. Garrett, please visit our flower store.

Following visitation the family and friends will go to the 1406 Event Center in Seneca.