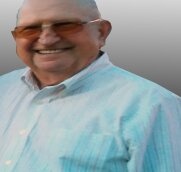 Paul was preceded in death by his parents.

The family will receive friends from 6 to 7 pm, Monday, December 9, 2019 at the Campbell-Biddlecome Funeral Home, Seneca, MO.

Funeral services will be held at 10:00 am, Tuesday at the Seneca First Baptist Church with Rod Van Gorkom officiating.


To order memorial trees or send flowers to the family in memory of Paul Durman Jr., please visit our flower store.

Committal service will be held at 2:30pm at the cemetery