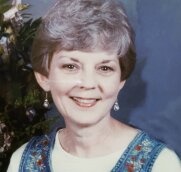 Norma Jane King was born September 15, 1947 in Joplin, MO the daughter of Norman Theodore King and Sara Ellen (Vermillion) King. Janie as she was called by her family and friends. She was a graduate of Olathe High School and attend Southwest Baptist University. Janie served her community as a City Councilperson for many years. She served as the Mayor of the City of Seneca for two terms. Janie also served as a board member of Seneca Cemetery Board for many years. Janie worked at various times at her husband’s medical office; otherwise, she was a full-time mom and homemaker. Janie enjoyed sewing and needlework, reading and playing the piano. Janie was a member of the Forest Park Baptist Church in Joplin.

Funeral services will be held at 10:00am, Tuesday, December 7, 2021 at the Seneca First Baptist Church with Pastor Nolan Carrier officiating. Burial will be in the Seneca Cemetery with, Ashley Wheeler, Andy Wood, Bobby Vermillion, Jim Walton, Alan Shelton and Ron Bennett serving as pallbearers.

In lieu of flowers memorial contributions can be made to the Alzheimer’s Association in care of the Campbell-Biddlecome Funeral Home, PO Box 380, Seneca, MO 64865.

To order memorial trees or send flowers to the family in memory of Norma ( Janie ) Jumper, please visit our flower store.