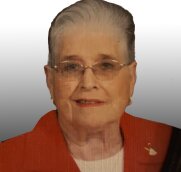 Norma was born July 27, 1928. She lived in the area her whole life. She retired from Milnot Company, in Seneca and was an active member of the United Methodist Church, United Methodist Women's Group. Norma also enjoyed going to and hosting family dinners, her family, friends, and traveling in their RV.

Norma had a host of cousins, nieces, nephews, and other extended family.

The family will receive friends at 10:00 am, November 21, 2020 at the Seneca United Methodist Church. A Celebration Of Life Memorial Service will follow the visitation at 11:00 am, with Pastor Marilyn O’Brien officiating. The body has been taken for cremation. Services under the direction of Campbell-Biddlecome Funeral Home, Seneca, MO.

Donations can be made to the United Methodist Church in lieu of flowers in care of Campbell-Biddlecome Funeral Home, PO Box 380 Seneca, MO 64865.
To order memorial trees or send flowers to the family in memory of Norma Lee Helm, please visit our flower store.