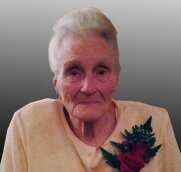 Nellie Terry was born September 9, 1926 in Racine, MO the daughter of William and Clara (Merriman) Terry. Nellie was a homemaker and loved her family. She was a member of the Pentecostal Life Center, Joplin, MO. Nellie was an example of a good Christian woman. Nellie was famous for her pancakes.

The family will receive friends from 6 to 7 pm, Thursday, July 25, 2019 at the Campbell-Biddlecome Funeral Home, Seneca.

Arrangements under the direction of Campbell-Biddlecome Funeral Home, Seneca, MO.
To order memorial trees or send flowers to the family in memory of Nellie Durbin, please visit our flower store.