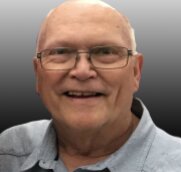 Morris G. Ehrhart was born October 17, 1949 in Evansville, IN the son of Charles (Pard) Ehrhart and Maxine (Rinehart) Ehrhart. Morris served this nation in the United States Navy. He worked for La-Z-Boy Midwest in Neosho, MO retiring after 45 years. Morris was a faithful Christian and was a member of the Seneca First Baptist Church. He served as a Deacon at First Baptist for many years. Thoughout his life he touched many lives sharing the love of Christ with everyone he met. Morris was a leader and was very respected. He loved his 1970 GTO which he displayed at numerous car shows winning countless awards. Morris proudly drove his GTO in all the Seneca parades. Morris loved fishing and spending time with his family, especially his grandchildren in which he treasured. Morris will be greatly missed by his nieces, nephews, family and his friends.

Morris was preceded in death by his parents Pard and Maxine Ehrhart and great-grandson Cheyenne Michael Ehrhart.

The family will receive friends from 6 to 7 pm, Thursday, March 25, 2021 at the Seneca First Baptist Church.

In lieu of flowers memorial contributions can be made to Help Works INC. PO Box 1475, Pawhuska, OK 74056.
__
To order memorial trees or send flowers to the family in memory of Morris Ehrhart, please visit our flower store.