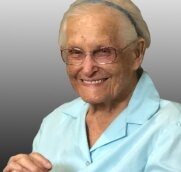 MonnaRae VanKirk was born July 13, 1925 in Fairland, OK the daughter of Sterling Benjamin and Ethel Pearl (Roberts) VanKirk. MonnaRae had lived in the area all her life. She formerly worked for Eagle Picher Industries in Seneca, MO. She was a faithful Christian who read 8 chapters in her Bible daily. MonnaRae read the entire Bible numerous times during her life. She loved to do crossword puzzles, crocheting and loved spending time with her family. MonnaRae was a member of the Peoria Assembly of God.

MonnaRae VanKirk married LaVerne Connell April 17, 1943 and he preceded her in death in February 24, 1998. She was also preceded in death by her siblings, Grady VanKirk, Shirley Rantz, Jenny Craft, Ruedela Turner and daughter Letitia Palmer.

The family will receive friends from 6 to 7 pm, Monday, August 2, 2021 at the Campbell-Biddlecome Funeral Home, Seneca, MO.

Funeral services will be held at 10 am, Tuesday, August 3, 2021 at the Bethany Baptist Church East of Seneca with Frank Ward officiating. Burial will be in the Seneca Cemetery with Kris Daniels, Shaun Daniels, Justin Daniels, Trenton Connell, Bryce Connell and Bryan Connell serving as pallbearers.
______
To order memorial trees or send flowers to the family in memory of MonnaRae Connell, please visit our flower store.