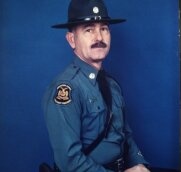 Merle Graham was born June 18, 1936 in Seneca, MO the son of Wayne and Lucille Graham. Merle join the United States Navy in 1955 and served four years. He returned to Seneca and was voted in as the City Marshal. In 1968 Merle begin his career with the Missouri State Highway Patrol and retired from the Highway Patrol in 1991.

Merle was preceded in death by his parents; one brother Bill Graham and a granddaughter, Jodi Hurtt.

Graveside services under the direction of Campbell-Biddlecome Funeral Home, Seneca, will be held at 10:30 am, Friday, August 6, 2021 at the Thompson Grove Cemetery.

In lieu of flowers memorial contributions can be made to the McDonald County Historical Society or the Shriner’s Children’s Hospital in care of the Campbell-Biddlecome Funeral Home, PO Box 380 Seneca, MO 64865
To order memorial trees or send flowers to the family in memory of Merle Graham, please visit our flower store.