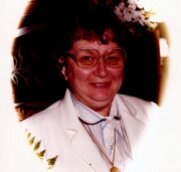 Bonnie Maxine Montgomery was born September 30, 1928 in Seneca, MO the daughter of William Carl and Bobbie ( Gallemore ) Montgomery. Maxine had lived in the Seneca area all her life. Maxine loved dogs and all animals. She loved to read and loved to travel.

Maxine Montgomery married Eugene Patton November 30, 1952 and he preceded her in death November 26, 1991.

Maxine was preceded in death by her parents and one brother Omer Montgomery.

Graveside services under the direction of Campbell-Biddlecome Funeral Home, Seneca, will be held at 10:00 AM, Wednesday, July 3, 2019 at the Seneca Cemetery.

The casket will remain closed at all times.

In Lieu of flowers memorial contributions can be made to the Seneca Cemetery fund in care of the Campbell-Biddlecome Funeral Home, PO Box 380, Seneca, MO 64865.
To order memorial trees or send flowers to the family in memory of Maxine Patton (Montgomery), please visit our flower store.