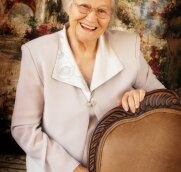 Mary Lou Davis of Seneca Missouri, age 88, entered peacefully into her heavenly rest on Friday, July 3rd, 2020 surrounded by her children. She was a homemaker, preachers wife, singer, musician, renowned baker and extended her role as a mother and grandmother far beyond the perimeters of her own family.
The oldest of five children, she was born on August 4th, 1931 to Sherman and Myrtle Buzzard in Jay, Oklahoma. She attended the Gray School house and Jay High school but did not graduate. Instead, just a few weeks after her 18th birthday, she took a train to Boise, Idaho to marry George Lee Davis on September 2nd, 1949. They had grown up together, but it wasn't until they both were saved in the Pentecostal revivals that were sweeping through the Oklahoma hills that a romance blossomed along with a fire in their hearts to preach the gospel.
From Idaho they traveled west to California and over the next 47 years they pioneered two churches in northern California and pastored 5 other churches in California and Oklahoma.
Music was a passion that was passed on to their children that included producing eleven recording projects and multiple tours across America singing and preaching in almost every state.
In 1994 George and Mary retired from the road and settled in Miami, Oklahoma. A short two years later George was tragically taken with a sudden heart attack. Although broken hearted, Mary continued for the next 24 years to attend and support the church pioneered by her son, George Davis Jr. in Seneca, MO. She became well known in the Miami area as "The Pie Lady" with her delicious pies and many people were blessed with her "extras". The joy of her life was to hear her family sing and watching you take a bite of her home-made pie!
Mary was preceded in death by her three sisters, Lenora Jean Rogers, Juanita Ruth Hampton, Joice Annette Mead and one brother, Sherman Buzzard, two grandsons Billy Justin Davis and Robert Todd Davis, one daughter, Lenora Ruth Stephens.
She is survived by four sons. George Lee Davis Jr. and Tammy of Seneca, Missouri, Robert Dee Davis and Barbara of Seneca, Missouri, James Edward Davis and Darla of Riverdale, California, Michael Eugene Davis and Angie of Wyandotte, Oklahoma, twenty-one grandchildren, forty-one great grandchildren, three great, great grandchildren and a host of relatives and friends who also called her Mom and Grandma Davis.
She will be greatly missed but her legacy will live on through the prayer and love she poured into her family and all who were fortunate to have known her.

To order memorial trees or send flowers to the family in memory of Mary Lou Davis, please visit our flower store.