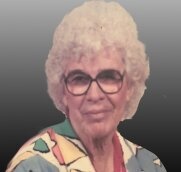 Mary Lou Sharp was born May 8, 1928 in South West City, MO the daughter of Dewey and Nora (Wilson) Sharp. Lou as she was loving referred to by her family and friends, graduated from Pineville High School. Lou worked as a waitress for the former 60 Grand Restaurant She formerly worked for the City of Seneca as a water meter reader. Lou married Virgil LeRoy Brown May 7, 1948 in Twin Falls, ID. She and Virgil spent many years as missionaries. They made many trips to Mexico over the 50 years of ministry. Lou loved her family, her church family and her friends. She was a member of the House of Mercy in Neosho, MO.

A private burial will be in the Kirk Cemetery Monday, October 26, 2020.
To order memorial trees or send flowers to the family in memory of Mary Lou Brown, please visit our flower store.