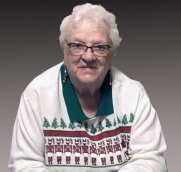 Mary Elizabeth Golden was born August 10, 1937 in Seneca, MO the daughter of Aaron (Lee) and Hazel Pauline (White) Golden. Mary graduated from Seneca High School and lived in the area most of her life. Mary loved working puzzles, collecting things, visiting with family and friends and she always took pride when going out with matching outfits and jewelry. She formerly worked as a Home Health Worker and Volunteered at Freeman Hospital. Mary attended Wayside Assembly of God in Wyandotte, OK.

Funeral services will be held at 2:00pm, Wednesday, January 5, 2022 at the Campbell-Biddlecome Funeral Home with Pastor Fred Gammon officiating.

Private burial will be in the Mount Hope Cemetery, Webb City, MO.

To order memorial trees or send flowers to the family in memory of Mary Kenney, please visit our flower store.