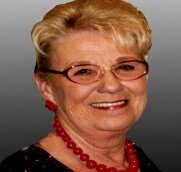 .
Marilyn L. Convirs, 76, Wyandotte, OK passed into eternal rest August 4, 2020 at the Medical Lodge of Neosho after an illness.

Marilyn L. Armstrong was born February 23, 1944 in McDonald County, MO. She was a life long area resident. Marilyn worked as a bookkeeper for Convirs Used Cars and the Bunker for over 35 years. Marilyn was of the Assembly of God faith and was a member of the Miller Flats Assembly of God in Wyandotte, OK. She was the coordinator of D-Day paint ball entries. All the percipients loved her and called her Mom. She enjoyed being around people and telling stories. She will be missed by many but remembered by all.

Marilyn was preceded in death by her parents Enos and Opal Armstrong and three sisters, Janet Beetem, Wanda Armstrong and Joyce Testerman.

The family will receive friends from 6 to 7 pm, Thursday, August 6, 2020 at the Campbell-Biddcome Funeral Home, Seneca.

Graveside services will be held at 10:00am, August 7, 2020 at the Seneca Cemetery with Larry Convirs and Don Staggs officiating.
To order memorial trees or send flowers to the family in memory of Marilyn Convirs, please visit our flower store.