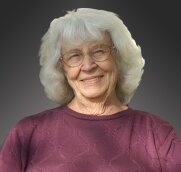 Margaret Ann Swihart was born June 21, 1929, in Warsaw, IN, the
daughter of Frank and Florence (Snider) Swihart. Margaret had lived
in Seneca most of her life. She was a former member of the Seneca
Study Club, author of Messy Margaret’s Cookbook and was one of the
founding members of the Seneca Food Pantry where she volunteered.

Margaret loved cooking, reading, jigsaw puzzles, crossword puzzles and
canning pickles for her family. Margaret loved her family and loved to
travel. She will always be remembered as Wayne’s co-pilot in all their
world travels.

Margaret Ann Swihart married J. Wayne King on April 2, 1948, in
Warsaw, IN, and he survives.

Margaret was preceded in death by her parents and a brother-in-law,
Jack Swanson.

Funeral services will be held at 10 a.m. Monday, September 27, 2021,
at the Seneca Church of Christ with Marilyn O’Brien and Jake King
officiating. Burial will be in the Seneca Cemetery with Josh King,
Will King, Jake King, Arthur King, Aaron Arlington, Shay McConnell and
Seth McConnell serving as pallbearers.

Memorial contribution in lieu of flowers can be made to the Seneca
Food Pantry or the Seneca United Methodist Church in care of the
Campbell-Biddlecome Funeral Home, PO Box 380, Seneca, MO 64865.


To order memorial trees or send flowers to the family in memory of Margaret Ann King, please visit our flower store.