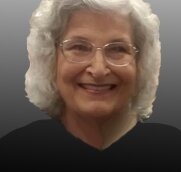 On March 27, 2020, with her four children standing by her side, Linda Butterfield went to Heaven after an illness at Freeman Hospital in Joplin, Mo. She was 72 years old.

Linda graduated from Wyandotte High School. At the age of 17, she married the love of her life, Terry Lynn Butterfield, on February 26, 1965.The union of this marriage produced four children, Jason Leonard, Wayne Ervin, Penny Lynn, and Adam Wade.

Linda worked at Glenberry’s in Commerce as a seamstress. She also managed Butterfield’s General Store where she fed nearly all of the kids at WyandotteJunior/Senior High School. She was also an active member of the Wayside Assembly of God church in Wyandotte.

Linda also leaves behind many cousins, nieces and nephews, and very close friends.
She is proceeded in death by her husband Terry, her parents, a brother, Lloyd Brooks, and a sister-in-law, Vera Faye Brooks.

Memorial Services will be held at a later time. Arrangements under the Campbell-Biddlecome Funeral Home, Seneca, Mo
To order memorial trees or send flowers to the family in memory of Linda Butterfield, please visit our flower store.