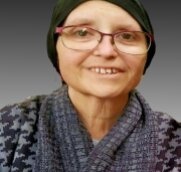 Kimberly was born September 19, 1967 in Oakland, CA. She owned and operated Kimberly Morante Book Keeping service. She was member Elks Lodge in Modesto, CA. She enjoyed scrapbooking, cooking, playing Bingo and driving the Slingshot. She was a big fan of Starbucks.

The body has been taken for cremation and the family will hold a memorial service at a later date.
To order memorial trees or send flowers to the family in memory of Kimberly Ann Morante, please visit our flower store.