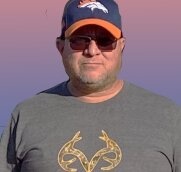 Kelly Eugene Merriman was born June 18, 1969 in Claremore, OK the son of A.J. and June Merriman. Kelly graduated from the Racine Apostolic School and was a member of the Seneca Cayuga Tribe of Oklahoma. He had worked as a warehouse supervisor for the Seneca Cayuga Tribe Tobacco Plant in Grove, OK for over 20 years. Kelly was know as a Jack of all Trades. He enjoyed playing golf and cornhole. He spent as much time as possible to playing with his grandchildren. Kelly was a member of the Apostolic Light House Church in Racine, MO.

Kelly was proceeded in death by his parents A.J. and June Merriman and one sister Deborah Blount.

The family will receive family and friends from 6 to 7 pm, Monday, October 11, 2021 at the Campbell-Biddlecome Funeral Home Seneca, MO.

Graveside services will be held at 10:00 am, Tuesday, October 12, 2021 at the Council House Cemetery with Pastor Kelly Sampson officiating. Pallbearers will be Gerald Merriman, Robbie Merriman, David Scott, Stephen Carpenter, Jordan Wallace and Paul Gonzalez will serve as pallbearers.
To order memorial trees or send flowers to the family in memory of Kelly Merriman, please visit our flower store.