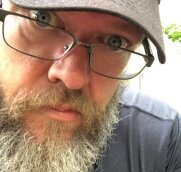 Justin was born January 15, 1973 to Floyd and Barbara Hawkins in Saint Joseph, Missouri. His parents proceeded him in death.

Justin had an infectious laugh. He was a Kansas City Chiefs fan, he loved Star Wars. He was quite the cook and made a mean dry rub. Justin graduated Seneca High School in 1991. Attended Missouri Southern State University . Justin worked several years managing The Red Onion Restaurant and several other restaurants. He was also a Sous Chef at Downstream Casino.
Justin was also accomplished in martial arts. He accomplished the rank of black belt in Hawaiian IKaika Association October 1995 - Present.

His greatest achievement were his Kids; Hadley, Owen, and Bostyn. He loved being the Viking Dad! Everything he did was with his children in mind. Justin was a great Dad, friend and brother.

In addition to his children he is survived by his big brother, Brad & Holly Hawkins, Nieces Delaney & Emma, his pups; Harley & Oreo, extended family and a host of many friends.

The family will be holding a Celebration of Life Memorial Service at a later date.
To order memorial trees or send flowers to the family in memory of Justin Hawkins, please visit our flower store.