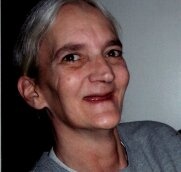 Julie C. Johnston was born July 13, 1963 in Colorado Springs, CO the daughter of Albert S. and Lottie M. (Julian) Johnston. She loved spending time with her grandson’s and her dog Shugger. Julie formerly worked in the hotel business, sawmill and retail sales. She had moved to Seneca in August of this year.

Julie was preceded in death by her parents and one brother, Scott Johnston.

The body has been taken for cremation under the direction of Campbell-Biddlecome Funeral Home, Seneca, MO. The family will hold a Memorial Service at a later date.
To order memorial trees or send flowers to the family in memory of Julie Davidson, please visit our flower store.