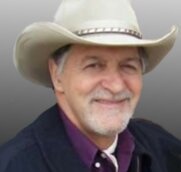 Julian (Andy) Melton, 67, Asbury, MO, passed away March 24, 2019, at Mercy Hospital in Joplin after an illness.
Julian Andrew Melton was born April 19, 1951 in Parsons, KS the son of John and Marilyn Melton. Andy served his country in the United States Army during the Viet Nm War. He was in 196th Infantry and the 3rd Battalion 21st Infantry. He was a member of the Task Force Gimlet which was the last Ground Combat Unit remaining in the Republic of Vietnam. Andy received several medals and ribbons for his service. He was a jack of all trades. He started working for the Katy Rail Road and worked many jobs over the years ending with Japer Products in Joplin, MO. Andy was a honorary member of the Lakota Sioux Tribe of South Dakota and a member of the Missouri Fur Company a mountain man reenactment group.
Andy married the love of his life Diane Alderson, June 20, 2004 and she survives. Additional survivors include two sons, Jay Fields, and wife Tia, West Pueblo, CO and Bob Stafford, Asbury, MO; one daughter, Stacy Welch, Joplin, MO; three brothers, James Melton and wife Vicki, Lutz, FL, John Melton and wife Bonnie, League City, TX and Jason Melton and wife Any Baxter Springs, KS; six grandchildren, four great-grandchildren and a host of family and friends.
Andy was preceded in death by his parents John and Marilyn Melton and one sister Vera Viola Simmons.
The body has been taken for cremation. A celebration of life memorial service will be held at 2:00 pm, Saturday, March 30, 2019 at the Campbell-Biddlecome Funeral Home, Seneca with Pastor Ernest Floor officiating.
To order memorial trees or send flowers to the family in memory of Julian (Andy) Melton, please visit our flower store.