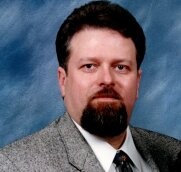 John V. Wynn was born May 28, 1961 in Grants, NM the son of Ted V. and Margaret Sue (Shope) Wynn. John was a 1979 graduate of Seneca High School. He formerly worked as a Jailor for the McDonald County Sheriff’s Department and after attending the Police Academy he became a road officer. For the last 10 years he has served as a Deputy Marshal in Noel, MO and the last three years he worked as a Dispatcher at the McDonald County 911. John loved watching Nascar especially Dale Earnhardt. John loved his family and spending time with them and going out to eat with them. He loved working on cars when he had time. John was a friend to all and would do almost anything that anybody needed help with even if it was just someone to listen to their story. John was of the Southern Baptist Faith.

John V. Wynn married Annette DeWitt May 25, 1990 in Commerce, OK and she survives.

John was preceded in death by his father and mother Ted and Sue Wynn.

The family will receive friends from 6 to 7pm, Wednesday, July 15th at the Campbell-Biddlecome Funeral Home, Seneca, MO.

Funeral services will be held at 1:00 PM, Thursday, July 16th at the Seneca First Baptist Church with Caleb Jones officiating. Burial will be in the Rogers Cemetery west of Welch, OK.

To order memorial trees or send flowers to the family in memory of John Wynn, please visit our flower store.