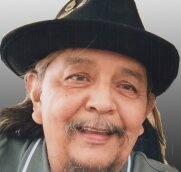 Left to cherish his memory is his first wife and mother of his children Debra E Wakole of Shawnee, OK; Fred Pahmahmie of Horton, KS; Jacqueline Peacock of Flandreau, SD; Jessica Peacock of Pipestone, MN and Jonah Peacock of Shawnee, OK; 17 grandchildren and 1 great grandson; brother Doug Wells and wife Barbara; Kathy Crownover wife of Rick; many relatives and friends too numerous to name.

Cremation and funeral arrangements are under the direction of Campbell-Biddlecome Funeral Home of Seneca, MO with reception service starting at 6:00pm, Thursday evening at the Sandy Captain Cultural Center on the Eastern Shawnee Tribal Grounds. A Celebration of Life service will be 9:00 am, Friday morning at Sandy Captain Cultural Center, with George Blanchard officiating. Per John’s request private burial will follow at a later date in the Wyandotte Cemetery.

The family will start receiving friends at 6:00 PM and remain at the Sandy Captain Cultural Center the rest of the night.