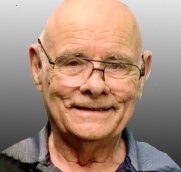 John R. Eidson was born March 9, 1935 in Wyandotte, OK the son of Homer and Heneretta (Rakes) Eidson. John graduated from Wyandotte High School. He grew up in the area and had lived in Oklahoma City the last 30 years. John was a “Trucker” not only he drove he formerly owned and operated a trucking firm. He also formerly worked as a “welder”. John loved OU Football, Golf, and was a history buff and ancestry researcher. John loved his family and loved to spend time with his grandkids.

John R. Eidson married Dorothy Marris September 30, 1954 in Neosho, MO and she survives. John was also preceded in death by one sister Judy DeWitt and one son John William Eidson.

To order memorial trees or send flowers to the family in memory of John Eidson, please visit our flower store.