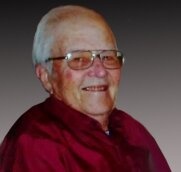 .
Joe A. Rinehart, 94, lifelong Seneca resident passed into eternal rest January 12, 2022 at his home after an illness.

Joseph Albert Rinehart was born October 23, 1927 in Seneca, MO the son of Joseph Claude and Orva Esther (Thompson) Rinehart. Joe was a graduate of Seneca High School. In the 1950’s Joe worked on TV’s. He owned and operated a farm most of his life. Joe loved being outdoors, working with cattle, gardening and spending time with his family and friends. He was a member of the Seneca United Methodist Church.

Joseph A. Rinehart married Vera Hall October 12, 1957 in Seneca, MO and she survives.

Additional survivors include one son Danny Rinehart and wife Verla, Seneca; one daughter, Diane Friend and husband Rick, Seneca; 6 grandchildren; 13 great-grandchildren and one on the way.

Joe was preceded in death by his parents.

The family will receive friends from 2 to 3 pm, Sunday, January 16, 2022 at the Campbell-Biddlecome Funeral Home, Seneca, MO.

Funeral services will be held 10:00am, Monday, January 17, 2022 at the Campbell-Biddlecome Funeral Home Chapel with Jim Stuart officiating. Burial will be in the Thompson Grove Cemetery with Danny Britt, Cody Altman, Aaron Edens, Gavin Oakley, Gabe Oakley and Rick Maggard serving as pallbearers

To order memorial trees or send flowers to the family in memory of Joe Rinehart, please visit our flower store.