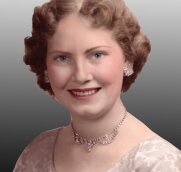 Jo Ann Blaylock was born April 21, 1939 in Rivervale, AR the daughter of William R. and Hazel N. (Yeager) Rhinehart. Jo Ann had lived in the area most of her life. She was an LPN working for the former Oakhill Hospital in Joplin and the Betty Ann Nursing Home in Grove, OK. Jo Ann formerly drove a truck for CFI. She was a former member of the Seneca Red Hat’s and was a member of the Seneca Christian Church.

The body has been taken for cremation under the direction of Campbell-Biddlecome Funeral Home, Seneca.

The family will receive friends from 10:00am to 11:00am, Saturday, July 17, 2021 at the Faith Assembly of God in Wyandotte, OK. A Celebration of Life Memorial Services will be held at 11:00am following the visitation.
___

To order memorial trees or send flowers to the family in memory of Jo Ann Blaylock, please visit our flower store.