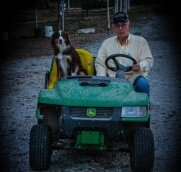 Jimmie Dale Graham was born January 18, 1942 in Seneca, MO the youngest son of Wayne Graham and Edna Lucille (Crawford) Graham. He was a lifelong resident of Seneca, Missouri. Jim attended Frog Pond School until 8th grade then graduated from Seneca High School in 1960 where he was an outstanding catcher on the baseball team. Soon after graduation Jim attended school to become an Auctioneer. He then bought the Seneca Livestock Sales Yard from Max Taft & Kenneth Prater in 1965 and owned and operated it for many years.

Jim married Ernestine Price in 1961 and had two children, Barbara and Billy. He later married Phyllis June Ross and they had one daughter, Dalene Carol (Punkin). In 1977 Jim married Martha Hoff Graham in Miami, OK and they had one daughter, Michelle Dawn Graham. Jim and Martha were married for 44 years making their home on the original Hoff family farm in Seneca. Jim farmed, ranched, bought and hauled cattle and ran Jim Graham’s Auction Service. Jim loved his dogs and always had one with him in his truck, on his tractor or on the Gator.

Jim and Martha spent many happy years together serving & helping many people in the community. Jim served on the Board of Directors for the Seneca Food Pantry, Farmers Feeding Neighbors and was a member of St. Mary’s Catholic Church. Martha preceded Jim in death in January of 2021. Soon after Martha’s death, Jim’s health began to decline and he became a resident of Seneca House where he remained until his death.

Jim is survived by his 4 children, Barbara and her husband Tim Thiesen of Crane, MO; Billy Graham and his wife Ronda of Rocklin, CA; Carol and her husband Sherman Brown of Marionville, MO; and Michelle and her husband Justin Ruddick of Anderson, MO. He has 7 grandchildren – Jeff, Dallas, Jocelynn, Gavin, Wyley, Colton & Emerson and two great-grandchildren – Macey & Weston and many nieces and nephews.

Jim was preceded in death by one grandson, Travis Thiesen; two brothers, William Dean and Merle Lee and his parents.
Viewing and visitation will be from 2 to 3 pm, Sunday, December 12, 2021 at the Campbell-Biddlecome Funeral Home, Seneca, MO.

Graveside services will be held at 10:00am, Monday, December 13, 2021 at the St. Mary’s Catholic Cemetery with Rev. Patrick Teeter officiating.

In lieu of flowers memorial contributions can be made to the Seneca Food Pantry in care of the Campbell-Biddlecome Funeral Home, PO Box 380, Seneca, MO 64865

To order memorial trees or send flowers to the family in memory of Jim Graham, please visit our flower store.