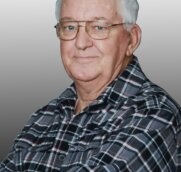 Jim owned and operated Seneca Express from 1975 to 1997. In the fall of 1997 he began working for American Tripoli, Seneca, Missouri, he retired in 2013. After retirement he was not one to sit around the house, he loved working around the farm, taking care of his cattle, his tractors and machinery and was always ready to help anyone that needed it.

He loved being outdoors playing ball, hunting or fishing. But the thing that he enjoyed most was coaching and later watching his children and grandchildren play a variety of sports. He coached baseball teams for several years and was a past president of the Seneca Athletic Club.

Jim was a member of the Stapleton Church of Christ, Joplin, Missouri.

Jim was preceded in death by his parents Claude and Violet Long, and grandparents Charles O & Minnie Long and Hoy R. and Nellie Bartlett and his father-in-law W. Scott Yeakey.

In lieu of flowers contributions may be made to the American Cancer Society Hope Lodge Kansas City, Missouri, in care of the Campbell-Biddlecome Funeral Home, PO Box 380, Seneca, MO 64865.

To order memorial trees or send flowers to the family in memory of James (Jim) H. Long, please visit our flower store.