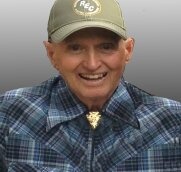 He was born on October 22, 1933 on the family farm near Wyandotte, OK to Arthur Anderson and Loma Thelma (Carter).

Ivroes was a 1951 graduate of Wyandotte High School. Following graduation he served in the U.S. Army until 1958 as a Tank Mechanic. He was stationed in Korea and while in the service received a rifle sharpshooter citation. After his military service, he worked for the former Miami Sales Company where he was a small engine repair specialist for over 30 years.

Ivroes enjoyed raising Hereford cattle, gardening and maintaining the family farm. He was known as a man who held himself to high personal moral values and exhibited this each day in his interactions with family and friends. He will be greatly missed.

Funeral services will be held at 10:00 AM, July 10, 2019 at the Campbell-Biddlecome Funeral Home with Pastor Danny Burleson officiating. Following the funeral services, Ivroes will be laid to rest at Wyandotte Cemetery with Hobert L. Brown, Corey Croci, Gregory Golden, Morris Golden, Vince Gonzalez and James Hayworth serving as pallbearers.

In lieu of flowers memorial contributions may be made to the Disabled American Veterans Organization.
To order memorial trees or send flowers to the family in memory of Ivroes E. Anderson, please visit our flower store.