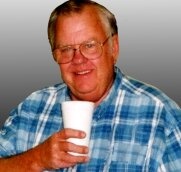 Harry Francis Bruns was born July 1, 1938 in Kansas City, KS the son of Harry and Nan (Francis) Bruns. Harry married Linda Lankford on 11/9/1962 in Kansas City, Kansas. With his wife of almost 58 years, he attended the Church of Hope in Neosho, Mo. Harry enjoyed playing dominoes, talking on the phone, sharing stories with friends, messing with old cars, and he loved being a grandfather to Kyle, Travis, Jon, Ryan and Kaley. Harry was an Air Force veteran. Harry loved telling jokes and could talk to anybody, but he always put family first. He was a loving father to Larry and his wife Vivianne and Terri and her husband Brett. Harry was a cherished brother to his sisters, Eileen and Lela. Harry was a favorite uncle, who was always extremely proud of his nieces and nephews. His eyes sparkled whenever he talked about each and every one of his family members.

Harry was preceded in death by his parents Harry and Nan Bruns.

The body has been taken for cremation under the direction of Campbell-Biddlecome Funeral Home, Seneca, MO and the family will hold a Celebration of Life Services at a later date.
To order memorial trees or send flowers to the family in memory of Harry Bruns, please visit our flower store.