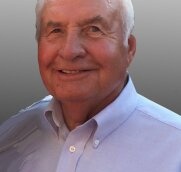 Harold Smith was born June 2, 1936 in Ottawa County, OK the son of Kenneth and Hazel Smith. Harold was a Lieutenant for the Miami Police Department in Miami, OK until he retired in 1981. He owned and operated the Bar S ranch in rural Wyandotte which was his boyhood home. Harold Smith served his country in the United States Army from 1958 to 1960. Harold was stationed at Camp McCoy, near LaCrosse, WI where he met Patricia K. Garske. Harold then brought Patricia back to Wyandotte and they were married October 27, 1960. He was a member of Faith Assembly in Wyandotte, OK. Harold was a man of honor who loved people and helping those in need.

Harold was preceded in death by his parents Kenneth and Hazel Smith and one sister Sondra Griggs.

The body has been taken for cremation under the direction of Campbell-Biddlecome Funeral Home, Seneca, MO. A Celebration of Life Memorial Service will be held at 10:00am, January 25, 2020 at the Faith Assembly of God in Wyandotte, OK with Gary Rhodes officiating.
To order memorial trees or send flowers to the family in memory of Harold L. Smith, please visit our flower store.