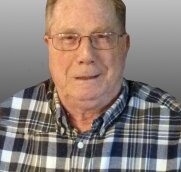 .
H. Gerald Keith, 88, Carthage, MO, passed away February 18, 2020 at Freeman West Hospital in Joplin after an illness.
Harvey Gerald Keith was born August 26, 1931 in Seneca, MO the son of Harvey B. And Wanda (Buzzard) Keith. Gerald grew up in Seneca, Missouri before continuing his higher education at the University of Missouri-Columbia, where he received a Bachelor's in Agriculture in 1956, and Pittsburg State University, where he received a Master's in Education Administration. During this time, Gerald also served his country in the United States Army during the Korean War as a Radio Operator. After completing his education, he spent the remaining years of his professional career in education. He was the Superintendent of Carterville Schools as well as a teacher and principal in both Seneca and Carthage. Gerald also served as a minister to congregations in Seneca, MO, Cleveland, OK, and Carthage, MO. He loved traveling, hunting, gardening, music, baseball, and ice cream. Gifted with dry wit, he was always compassionate and a loyal friend and mentor. He was always there for his family and will be remembered as a loving father and doting grandfather. He will be missed by all.
Survivors include; two sons, Michael Keith, Carthage, MO and Byron Keith, Broken Arrow, OK; two daughters, Leisa Matthews, Carthage, MO and Tanya Elaine Keith White and husband Gentry, Brisbane, Australia; one sister, Melba Jean Wilson Elkins, Neosho; 8 grandchildren and a host of nieces, nephews and extended family and friends.
Gerald was preceded in death by his parents, one brother, Duane Keith and one daughter-in-law Sunny Keith.
The family will receive friends from 6 to 7 pm, Monday, February 24, 2020 in the Chapel at Ulmer Funeral Home in Carthage, MO.
Funeral services will be held at 10:00 AM, Tuesday, February 25, 2020 at the Seneca Church Of Christ with Andy Wilson officiating. Burial will be in the Buzzard Cemetery, Racine, MO.
Funeral arrangements are under the personal direction of Campbell-Biddlecome Funeral Home, 1101 Cherokee Ave, Seneca, MO.


To order memorial trees or send flowers to the family in memory of H. Gerald Keith, please visit our flower store.