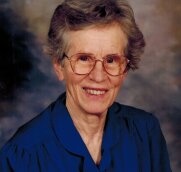 Grace Freda (Weihe) Eads (91) of Seneca, Missouri, passed away August 31, 2021. She was born September 1, 1929, the daughter of the late Frederick and Erna (Lindauer) Weihe. She was united in marriage to Myrl Eads May 1, 1954, at the family home in Stotts City. Grace attended Pleasant Hill primary school with her seven brothers and sisters followed by Mount Vernon High School from which she graduated valedictorian. She attended Springfield business college which became Draughon School of Business. Grace then worked at the offices of Dr. Howard, Dr. Scorse and Dr. Longnecker in Joplin. Later, after moving to Seneca, Grace worked at the Racine Post Office. Grace treasured the time that she spent with her family, her many close friends, her travels, and her many volunteer projects including the United Methodist Church of Seneca and blood drives of the Red Cross.

Grace is survived by her sons, David Eads (Nina) of Seneca, and Daniel Eads (Janina) of Joplin, and her grandchildren Matthew and Imogen Eads. She is also survived by her brother Roy Weihe and his wife Georgia, her brother Leland Weihe and his wife Sandy, and brother-and-sister -in-law George and Velda Eads. Many nieces and nephews and their families.

Along with her parents, Grace was preceded in death by her husband Myrl Eads, her sisters Louise Veith and Ruth Langston, and her brothers Fred, Maurice and Carl Weihe.

Grace appreciated the family, friends, and neighbors who assisted her and the staff at Westgate who cared for her with kindness and compassion.

Graveside service under the direction of Campbell-Biddlecome Funeral Home, Seneca, will be held at the Seneca Cemetery 10 a.m. Tuesday September 7, 2021 with Pastor Marilyn O’Brien officiating. Following the ceremony, lunch will be shared at the Seneca Methodist Church.

In lieu of flowers, donations may be made to the Seneca Food Pantry, the Seneca Methodist Church or the charity of your choice.

To order memorial trees or send flowers to the family in memory of Grace Eads, please visit our flower store.