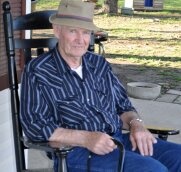 Gordon James Faust was born August 28, 1929 in Clinton Rock, WI the son of Chester and Laura (Becraft) Faust. Gordon served his country in the Army. He was of the Christian faith. He was a carpenter by trade and retired from ER Smith in 1990. Gordon loved fishing, gardening and especially spending time with his family.

The family will hold a celebration of life service at a later date.
To order memorial trees or send flowers to the family in memory of Gordon Faust Sr., please visit our flower store.