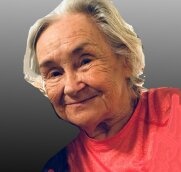 Gloria Jean Ferguson, 77, Wyandotte, OK, passed away April 21, 2019 at Freeman Hospital after an illness.
Gloria was born January 27, 1942 the daughter of Edgar Lee JR. and Georgia Lee (Fields) Beard.
Gloria formerly worked at the Eagle Pitcher Plant in Seneca. She was a member of the Cherokee Nation Tribe of Oklahoma. She loved spending time with her children, grandchildren and great-grandchildren.
Survivors include her children; Monett Ferguson, Farris Smith, Robert Erwin, Glen Smith and William Ferguson; 8 grandchildren; host of great-grandchildren and extended family and friends.
The body has been taken for cremation under the direction of Campbell-Biddlecome Funeral Home, Seneca. Services will be held at a later date.
To order memorial trees or send flowers to the family in memory of Gloria Jean Ferguson, please visit our flower store.