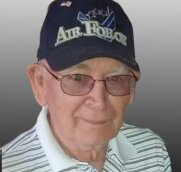 Glenn Henry Weaver was born May 3, 1928 in Pitcher, OK the son of Ray Lloyd and Martha E. (Gyami) Weaver. Glenn graduated from Wyandotte High School. After graduating Glenn went into the Air Force to serve his country. Following his service Glenn went to NEO A&M college then to OSU where he earned a Bachelor of Science degree in Horticulture. Glenn then went to work for Greenleaf Nursery in Park Hill, OK, where he spent the next 50 years. Glenn was a Supervisor and managed the field crews for many years. Later in his career with Greenleaf he became the Shipping Supervisor. Everyone who worked with him loved him. He loved being outdoors and taking care of his plants. Glenn loved spending time with his grandkids, bowling and photography. Glenn was a proud member of the Wyandotte Tribe Oklahoma. He will always be remembered for his kindness and willingness to help others.

Glenn was preceded in death by his parents, one son Ray Lenard (R.L.) Weaver, one brother Ted Weaver and one sister Ruth Brooks.

Graveside services under the direction of Campbell-Biddlecome Funeral Home, Seneca, MO, will be held at 2:00pm, Monday, December 21, 2020 at the Wyandotte Cemetery with Chief Billy Friend officiating.
To order memorial trees or send flowers to the family in memory of Glenn Weaver, please visit our flower store.

Public may view and sign the guest book from 9:30am to 12:30pm, Monday at the funeral home.