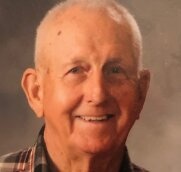 George Hansel Pendergrarft was born December 28, 1935 in Pineville, MO the son of Frank and Myrtle (Riter) Pendergraft. George attended schools in the White Rock and Jane, MO. George was a Korean War Veteran. He served in the US Marine Corps from 1953 to 1957 obtaining the rank of Master Sergeant. George spent many years on the pipeline working all over the United States. He was a 60-year member of the 798 Pipeliners Local Union and a member of the Fairview Antique Car Club. George loved fellowship and times to visit with friends and family. He was an avid and firm believer in Christ and read his bible daily. He always had plenty of stories and jokes to tell both for fact and entertainment of the crowd. He worked tirelessly and selflessly to provide for his family making many sacrifices over the decades to ensure his wife, children, and grandkids would be taken care of. He encouraged his kids, grandkids, nieces, nephews, and all family and friends to become a believer in Christ and be redeemed for Jesus in this life so they could have eternal salvation, we only hope they heed his warning and accept Jesus Christ as their lord and savior before it's too late. George provided hard work, knowledge, honesty and craftsmanship to any friend, family member, neighbor, church, or community organization that needed help. Many times, he did these things for little or no pay. George often said he would rather have just a few true friends than $1 million dollars and he meant it. He took pride in his work and expected perfection of himself while giving others the grace to be less than perfect, in the end he knew he would take up the slack. When selling a piece of farm equipment, he would quip with a wry grin "It has a 30-30 guarantee...30 feet or 30 seconds - whichever comes first". It was said he could fix anything except a broken heart and weld up anything but the crack of dawn. George was a faithful member of the Hart Baptist Church.

George was preceded in death by his father and mother; 2 sisters, Barbara and Dosha; 1 brother Dewey and one grandson Ryder.

The family will receive friends from 6 to 7 pm, Friday, January 21, 2021 at the Campbell-Biddlecome Funeral Home, Seneca.

Funeral services will be held at 10:00 am, Saturday, January 22, 2021 at the Hart Baptist Church in Hart, MO with Pastor Evert Staib officiating. Burial will be in the Butler Creek Cemetery with Gary Pendergraft, Clayton Pendergraft, Mitch Pendergraft, Jacob Mustard, Claude Pendergraft and Roger Hays serving as pallbearers.


To order memorial trees or send flowers to the family in memory of George H. Pendergraft, please visit our flower store.