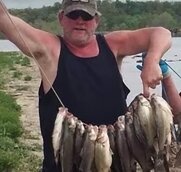 Gary worked for LA-Z-Boy Midwest in Neosho. He loved to fish, hunt and being outdoors. Gary was a major father figure to his kids and grandkids lives. He cherished the time he spent with his grandkids.

Gary was preceded in death by his parents and one brother Jerry Taylor.

The body has been taken for cremation under the direction of Campbell-Biddlecome Funeral Home, Seneca, MO. The family will hold a memorial service at a later date.
To order memorial trees or send flowers to the family in memory of Gary Taylor, please visit our flower store.