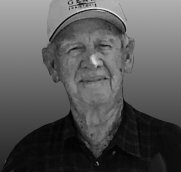 Gary Lee Ritter was born May 20, 1936 in Wyandotte, OK, the son of Drew and Irene (Shoemaker) Ritter.

Gary graduate from Seneca High School in 1954 and begin working at the former IGA in Seneca, MO. Gary then went to work for Boeing until he purchased a gas station in Rogers, AR and started selling insurance. Later Gary purchased and operated the Dairy Queen in Southwest City. In 1962 he went to work for Commercial Metals. Then 1970 Gary and his brother G.D. Ritter opened Chalet Club in Grove, OK. He then opened a Five For A Dollar Hamburgers in Carthage, Avila and in Joplin. In the 70’s to 80’s he sold cars In Joplin. Gary then went back to work at Commercial Metal’s retiring in 1996. Gary was the president of the Liars club at Mama’s Place in Seneca, MO. Gary loved MOKAN and spent many years racing. His last race was in 2014. He loved to fish and hunt. Gary will always be remembered for driving Lil Red Express Truck. Gary will also be remembered as one of the icons of Seneca.

Gary was preceded in death by his parents Drew and Irene Ritter.

The family will receive friends from 6 to 7 pm, Thursday, May 27, 2021 at the Campbell-Biddlecome Funeral Home.

Funeral services will be held at 10:00 am, Friday, May 28, 2021 at the Campbell-Biddlecome Funeral Home Chapel with Jackie Lankford officiating. Burial will be in the Seneca Cemetery with Steve Ritter, Todd Ritter, Nick Ritter, Austin Ritter, Mason Ritter and Travis Ritter serving as pallbearers. Honorary Pallbearers will be G.D. Ritter, Roy Ritter and Ray Ritter.
____________
To order memorial trees or send flowers to the family in memory of Gary Lee Ritter, please visit our flower store.