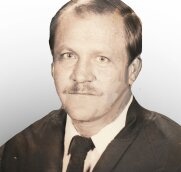 Gary Eugene Beehler was born October 8, 1951 in Vinita, OK, the son of Marvin Eugene and Donna (Stafford) Beehler. Gary formerly worked for Pettit Mop Plant, BF Goodrich, Kirby, then eventually worked for and retired from Cinch. He loved to fish and hunt and spend time with his family and especially his grandchildren which leaves behind a legacy of memories. Gary was a member of the Cornerstone Faith Mission Church in Bluejacket, OK.

Additional survivors include his children; Marsha Russell and Josh, Fairland, OK; Shane Beehler and Melissa, Fairland; Jason Beehler and Diana, Bluejacket; one brother, Dwayne (Glen) Beehler, Miami, OK; one sister, Tonya Chandler, Fairland; 14 grandchildren, 2 great-grandchildren and one on the way. Gary was blessed with numerous neices and nephews and they were a very important part of his life.

Gary was preceded in death by his parents, one infant son Randy Eugene Beehler, his step-mother Louise Beehler, and two sisters Charlene Mabery and Treva Sharp.

The family will receive friends from 1pm to 2pm, Wednesday, September 1, 2021 at the Cornerstone Faith Mission Church in Bluejacket, OK. Funeral services will be held at 2pm following the visitation with Carroll Hopkins officiating.

Burial will be in the Fairland Cemetery with Shane Beehler, Jason Beehler, Dalton Wilmoth, Layne Wilmoth, Cody Beehler, and Kenny McKinzie serving as pallbearers. Honorary pallbearers will be Kaylee Beehler and Devern Bradley.

Services are under the personal direction of Campbell-Biddlecome Funeral Home, Seneca, MO.

To order memorial trees or send flowers to the family in memory of Gary Beehler, please visit our flower store.